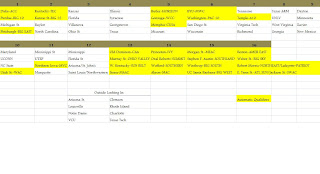 With only 11 weeks until tip-off, here is the early 68-team tournament projection for 2010-2011.
Last four in: Arizona vs. St. John's and Saint Louis vs. Northwestern in two of the four first round games. Winners will become 12-seeds.
Teams 65-68: Robert Morris vs. Lafayette and East Tennessee St. vs. Jackson St. in the other first round games. Winners will take the final 16-seed spots.
Posted by The Bracket Mensa at 1:04 PM